Located just outside Rumney, near Plymouth, New Hampshire, Stinson Mountain (2900′) is way off the beaten track as far as White Mountain peaks go and finding the trail head is an adventure all by itself. Once I left pavement and headed down the unpaved road that surrounds Stinson Lake, I relied on my intuition and followed the deeply eroded road leading to the trail head parking lot, praying that my muffler would survive the journey.

Stinson Mountain is on the New Hampshire 52-with-a-view list which is a wonderful peakbagging list to work through if you enjoy climbing scenic mountains and travelling to the distant edges of the White Mountain Nation Forest, which I confess I do. Home to an old fire tower built in 1927, it remained in service until 1967, before being dismantled and removed in 1985.

Just 1.8 miles in length, I chose this hike because I was fairly certain it would be free of snow in mid-May, being lower in elevation than the 4000 footers farther north. While comparably “short”, the climb up Mt Stinson should not be underestimated, requiring 1400′ of elevation gain, which is a sizable gradient for a hike of this length.

The beginning of the Stinson Mountain trail is shared with a snowmobile trail, which is a popular winter sport in the nearby Three Ponds region adjacent to Mount Stinson. The snowmobile trail splits off at a sign part way up the mountain where the trail becomes more of a scramble, climbing over roots and rocks to an open ledgy summit. The snowmobile trail continues to the summit and it’s possible to hike down it back to the trail junction forming a loop, which I did on my return trip down the peak.

Blazed in yellow, the hiking trail is easy to follow until just below the summit where a number of herd paths split off from the main route. While I suspect they all end up at the summit, I chose the rightmost and widest one, emerging from the forest at the rear of the summit ledges, where the fire tower pylons are visible.

The view from Mt Stinson is mostly south-facing, although there are several herd paths leading from the summit area that one can follow to see more views to the east and west.

Looking south, the “new” wind turbines above Rumney are clearly visible on the other side of the valley. No doubt, they’ll be removed eventually, just like the fire tower, when they cease to be useful.

I descended Stinson Mountain on the snowmobile trail for a bit of variety. It was muddy and moderately eroded as snowmobile trails often are in spring, but the forest is much more open along it, exposing flowering fields of hobble bush. Spring has arrived in the White Mountains at last, and a bit ahead of schedule, too!
‘
Total Distance: 3.6 miles with 1400’ feet of elevation gain. 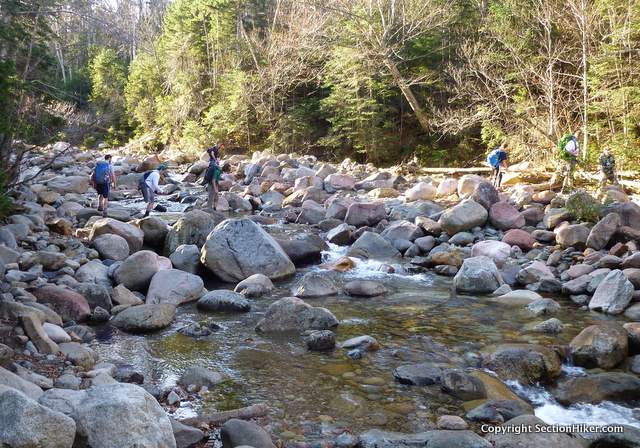